It’s not often in our adult lives (in America anyway) we really truly get to take a significant break from our day-to-day. When I paused my blog updates back in August, I had a lot of big projects going on, both at work and at home, and I felt that I was rapidly running out of summertime to enjoy. I reprioritized my free time and decided the 365 Days of Pattern project could take a little break while things wrapped up (at least at work), and I thought I’d be back in a month.

Well, that turned into three months, and I’m not the least bit sad about it. While I was out:

And then there’s the knitting, which has been constant throughout:

On vacation, I needed something relatively brainless to work on while hanging around at the beach. I picked up two skeins of  Classic Elite’s Liberty Wool and worked up these toe-up worsted socks, I think on size US 4 needles. I’ve been meaning to make myself a pair of superwash worsted socks for a long time and these are just great. Winter, I am ready for you.

And my favorite knit so far this year: a honeycomb brioche ombre circle scarf. I’m in love with the two-tone honeycomb stitch but unfortunately the edges curl like mad. I still get compliments on it, but I might try adding another layer of fabric on the wrong side to help show off the right side of the fabric. The yarn is Ella Rae Lace Merino DK, one skein each of the neon pink and neutral (not sure of exact color names). It’s long enough to wrap around my neck 2 – 3 times and adds just the right amount of neon in my opinion. This might be destined for a future pattern if I can solve the curling issue.

I just want to keep you warm.

I'm Lacey Volk, a knitter and general homebody from Pittsburgh, PA. I believe in beautiful and well-made things, crafted with intention, and I have a modern aesthetic with a vintage bent. Volkstricken Industries is an on-going chronicle of my knitting, designing, and other creative adventures.

I'm currently attempting a 365 Days of Pattern drawing project, and am designing knitting patterns for release throughout 2013. Stay tuned!

You can also find me on Ravelry and Pinterest as Volkstricken.

This is very much an experiment, but I'm moving some patterns over to Society6 where they can be purchased as prints, iPhone cases, and more! Lots of fun, go check it out:

Drag this link to your feed reader of choice: RSS Feed 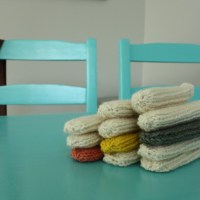